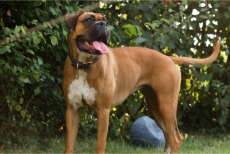 Bosie is fed on raw meat such as frozen mince (lamb, beef, venison and green trip) organ meat for human consumption (heart, liver kidney) and lamb bones from the local butcher and free range chicken and other poultry carcasses, wings, necks and feet. We occasionally feed lamb or beef trachea.
We supplement daily with Krill oil and kelp powder. Once a week she gets a garlic/yeast supplement. She also gets organic cottage cheese, natural yogurt and Kefir 2-3 times a week and boiled egg twice week. Once a week she gets fish, Sardines she will eat whole and raw but other white fish needs to be steamed for her to eat. We usually add some chopped fresh herbs like parsley or coriander to the steamed fish.
She likes some fruit (dates, apples, clementines and berries) and we offer them as a treat which she sometimes chooses but sometimes isn't interested. She enjoys an occasional almond or raw organic peanut butter (no more than 2-3 times a month and in very small quantities). She never has any carbohydrates like grains or root vegetables.
Other occasional treats are dried whole sprats, dried fish skin, dried tripe sticks or freezedried meat,dried rabbit ears but they are not offered on a daily basis and are usually a reward for good behaviour.
We have stopped chemical preventative worming in summer (2014) and use worm count
(Incl lungworm) analysis instead - so far two have come back all clear. We use raw organic coconut oil and other herbal/natural preventatives to prevent worms. (We live in the UK and are very luckily to not have many of the problematic parasites and diseases found in continental Europe and the USA).
When we travel to Europe we are obliged by law to use a conventional wormer before returning which happens once every 12-18 months.
We don't use conventional tick or flea treatment but use a coconut/neem based product in summer and Bosie has never had fleas or ticks. (We may opt for conventional preventative when traveling to areas with a high occurrence of tick and flea related illnesses)
She had conventional first and second vaccines at 7 and 12 weeks old and had boosters one year after that (excluding leptospirosis) and we will be using titer counts to determine her immunity in the coming years instead of automatically vaccinating. She had a reaction (swelling and breathing difficulties) to the second vaccines which is highly likely to have been the Lepto vaccine. Give that the Lepto vaccine isn't proven to be fully active long term we opted to exclude it for the annual booster and she didn't have a reaction.
Bossy is not food motivated and will even leave food in her bowl on occasion instead she is highly play motivated and is an extremely active dog who gets a minimum of 2 hours of exercise daily (free running and play) on the beach or in our fields
We brush her teeth 3-4 times a week with an enzyme based toothpaste.
Bosie has not been spayed as we believe that she needs her female hormones as much as we do. she has had two seasons so far. We have not decided whether we will breed from her (see below) but if we decide not to we will travel to Germany for her to have a partial spay (one ovary remains, the other and the womb are taken out) to leave the hormone production intact. This procedure is not commonly undertaken in the UK but more common in Germany which is where part of our family lives so we have easier access.
Bosie was diagnosed with a small heart murmur by our (very conventional) vet who also made a diagnosis of a cruciate ligament injury (when Bosie was limping after playing on the beach) which has since been disputed by our animal osteopath who diagnosed a back weakness at L3/L4 and Bosie receives osteopathic treatment for this every 6-8 weeks.
We a currently considering consulting with a holistic vet on having an MRI scan to fully determine the extend of her back problem and also to get a second opinion on the heart murmur as we wouldn't want to breed a dog with potentially genetic problems.
Apart for that she is a fit and healthy dog, who doesn't suffer from any skin or ear infections and unusually for a boxer doesn't drool.
As you can see for the above we are highly motivated to give our dog the best possible life and undertake a lot of reading and research to make the best possible decisions on her behalf. As we ourselves do not eat processed food but largely buy organic and local, it seems only natural to extend that to her. We are passionate about Boxers who are known to have some chronic health problems and perhaps a shorter than usual life span particularly due to mammary tumours. We are therefore really interested in joining both your raw feeding and cancer prevention study. 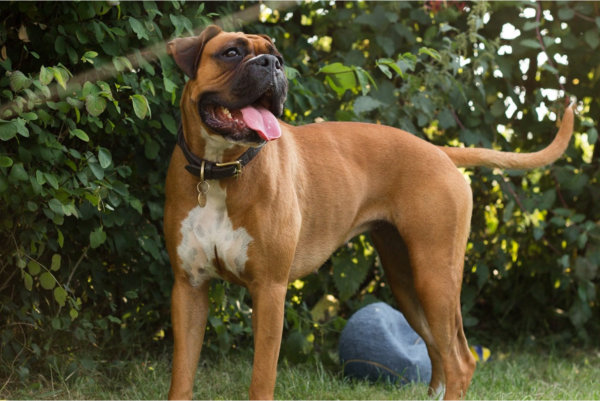