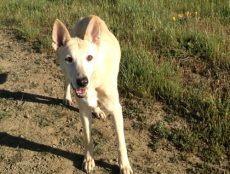 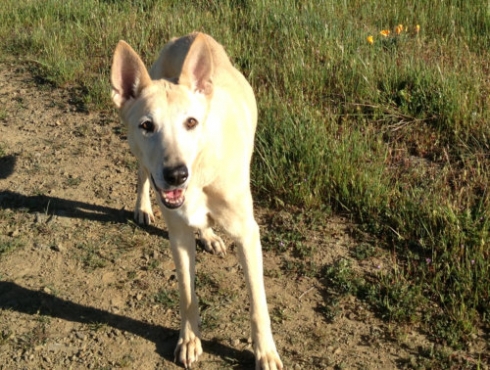 I love my dog!!!! <3 <3 <3 I found a tumor that was bigger then a quarter in her right shoulder at age 8. It was causing her to limp after 5 minutes of walking. If I touched it with the lightest of pressure she would yelp as if I was killing her. I read up on dog nutrition and how to heal cancer in a dog through diet, by reading books and online. I immediately threw away her dry dog food and started the barf method of feeding. after about 3 months of that I read somewhere about the prey model of feeding and stopped feeding all veggies. S

Sometimes if my dog has an upset stomach she will eat wheatgrass however. She eats raw organic chicken, backs usually. Sometimes she gets a half of a chicken or other cuts, whatever is affordable, and once a week I add raw organic chicken livers. I have found that she is allergic to beef so I just stick to chicken. To accelerate healing, when I first started the diet I would feed her for 4 days and fast her for one, she was over weight at this time. After 6 months or so I changed the schedule to feeding her for 5 days then fasting her for one day. Six months later I started feeding her for 6 days and fasting her for one day which is where we've been ever since. She hasn't limped since after the first year of raw.

She has more energy now then she did when she was 8 years old. Her caluces on her elbows are much smaller now with no problems, they were four times the size and cracking and bleeding before the diet change. She had gotten bit twice on her side by a spider when she was 5 and the wounds reappeared and rehealed during the first year of raw. The tumor almost completely disappeared after a year of raw, however she eats an occasional kibble or 10 off the floor every once in awhile when I take her to friends houses or to my parents house, who feed their dogs kibble, so the tumor has gotten a little bigger from the almost nonexistent pea size it was after the first year of raw when she had no access to kibble ever.

I have had the tumor checked at the vet, they reported no cancer cells and it stays between the size of a nickel and a dime. I can touch it and she doesn't make a sound. She at age 13 runs circles around other dogs half her age who eat dry dog food. Her teeth are clean and she does not have the "Dog Smell," or bad breath that her kibble eating friends emit. Her attitude has changed for the better since the diet change, she is way more chill, she listens and pays attention better, and she is less nervous and neurotic in previously stressful situations.

She is on the lean side and people who just don't get it tell me all the time I am killing my dog or that I need to feed her cooked food because they are used to seeing overweight dogs. Lots of people approach me asking me how old my puppy is and their jaw drops when I tell them her age. The most common response I get is, "She doesn't look older then 3 or 4." I agree and look forward to many more loving years with her by my side. <3

She eats raw organic chicken, backs usually. Sometimes she gets a half of a chicken or other cuts, whatever is affordable, and once a week I add raw organic chicken livers. I have found that she is allergic to beef so I just stick to chicken.